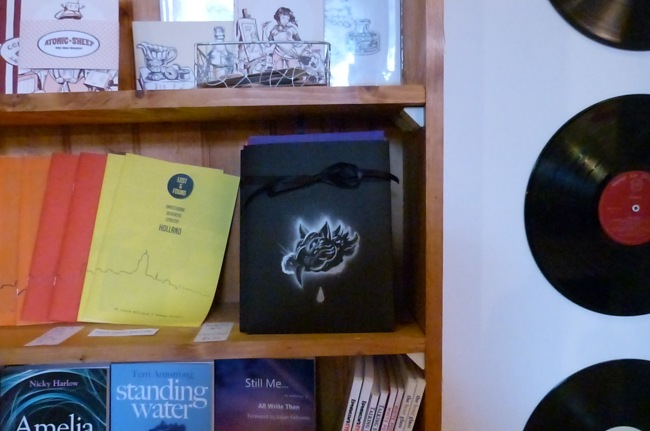 My my, what’s that sexy thing I see reclining on a shelf at the Memories of the Future pop-up shop? Why, it’s Panspermia Press‘s deluxe collection – all seven previous issues from the press in a beautiful handcrafted package. Is there anything as alluring and luxurious? I think not.

Believe it or not, you can get your grubby mitts on one of these for just £4.50. Nonsensical value for money. Only six of them exist in our universe, so get in quick. And by quick I mean now. Go on. Off you go. Shoo.

The theme of the pop-up shop (which is in fact more of a festival than a shop) is analogue meets digital. It’s an interesting area. I mean, digital’s great, isn’t it. Very handy, very convenient. But analogue’s great too, for different reasons.

Some inconveniences are lovely, aren’t they. Practically foreplay.

Okay, so this is getting a bit smutty. Forget foreplay. Think of it instead as ritual. This is what analogue gives us.

So get your hands on some analogue. Visit the wonderful Memories of the Future pop-up shop and check out Panspermia Press‘s deluxe collection. There’s plenty to see besides. The shop’s brimming with indie books, zines, records, artwork, workshops and biscuits. And it won’t be around for long. Catch it while you can. 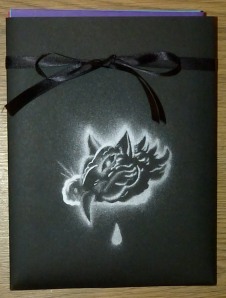 Just so you know: as part of their Memories of the Future DIY projects series, the adorable folk at Bees Make Honey have interviewed Panspermia Press for their blog. You can check the Q&A out here, but if you can’t be bothered to click on the link, or if you simply can’t bear the thought of leaving this website, you’ll find a faithful transcript below.

Brace yourself. Here it comes:

Next up in our Memories of the Future DIY projects series is Panspermia Press who have been gifting illustrated short stories to the City of Nottingham for the past few years. Expect a macabre sense of humour, characters drawn from well-observed human oddity and a love for taking both the sublime and the ridiculous all the way to their bitter-sweet illogical end.

What is Panspermia Press & why/how did you start?

Panspermia Press is a very small DIY press. Whenever the mood takes us we print off a pile of short stories as colourful illustrated pamphlets. Then we distribute them around Nottingham, usually leaving little piles at Nottingham Contemporary, Broadway, Lee Rosy’s and Geoff Blore’s bookshop. We came up with the idea for the project while touring with Savoy Grand in 2010. We felt there was a resonance between our writing and illustration styles, and it seemed like a fun way to collaborate. That’s what happens when you get free German beer every night for two weeks.

This is quite different to the usual method of self-publishing (either ebooks, or expensive print runs), it feels a bit more like you’re giving a gift to the world, is that intentional?

I guess it is a gift in the sense that we do it without expecting anything in return. Perhaps we’re true altruists. Or perhaps we’re narcissists. Or maybe we’re just insecure, lonely and crying out for love. Who knows. But there’s definitely something good about making something just for the sake of making it, and then letting people who might like it have it. The issues get snapped up quite quickly, so it’s nice to think that they might be scattered all over Nottingham, sitting on bookshelves or amongst stacks of magazines in loos. That was part of the appeal of the project: making something physical, attractive and – in a way – collectible for people to help themselves to. And it’s not art for art’s sake: Panspermia Press may at times be dark or surreal, but it’s always accessible and humorous too.

You both have backgrounds in independent music, do you think you’ve been influenced by the DIY nature of fanzines & gig promotion?

Chris has designed posters and flyers for Gringo Records and Damn You, amongst others, so that’s helped to hone his skills. And we’re both pretty seasoned in distributing flyers and so on – not that there’s much talent in that. More generally, I’d say being musicians in independent bands (and being surrounded by that environment) has possibly made us more susceptible to DIY projects and collaborations.

Would you call your publications zines?

I suppose they’re zines in the sense that they’re printed in very limited runs and involve a fair bit of passion, effort and expense without any financial gain. But unlike a lot of zines, they’re not topical or dedicated to bands or anything like that. Each issue is simply one illustrated short story. So I guess the press is dedicated very directly to illustration and to the short story form – two things we’re both big fans of.

How does the collaborative relationship work?

Usually I write a short story that’s in the spirit of the press, and if Chris likes it enough he’ll work on an illustration and put the whole thing together. Then we usually stress ourselves out with print shops and imaginary deadlines before finally taking a stroll around town with a plastic bag full of issues. We were actually close friends a long time ago as kids, and met again by coincidence in Nottingham. So the collaboration and all of its practical elements are quite social – much like being in a band. Writing and illustrating can be a lonely, soul-destroying business, so it’s not unwise to join forces with others.

Do you make them in order to promote your other creative work (novel & short story writing/design stuff)?

We don’t really use it to promote our other work directly. There was one occasion where my first novel was shortlisted for a publisher’s online competition, and we distributed an issue to try to earn it some votes; the novel came second place, and maybe the issue contributed to that. And that novel – somewhat by accident – has now come to the attention of a local publisher through the press, so I guess there was some indirect promotion at work there. But that’s all exception and chance. Otherwise, it’s just good to have something like this on your artistic CV. And it all feeds into our other creative work in that it provides purpose, practice, collaboration and new perspectives.

Any practical recommendations or useful links for those embarking on similar activities?

As Bukowski said: “Find what you love and let it kill you.” But that’s not very practical, is it. Perhaps we should start being more practical.

Your creative pursuits are very much labours of love rather than money-making endeavours. Do you prefer things this way?

We love money. Money’s great. Hence we’ll be charging a meagre fee for the deluxe collections stocked at the pop-up shop. It would be great to always get money for doing what we love – at least in order to break even – but that’s often not the way it works and we’re fine with that. We’re used to that from being in bands. Sometimes you just have to do something because you like doing it, because you think it’s good and because you hope other people will think it’s good too. There’s a lot of this around. The digitalisation of most mediums means that creative endeavours are more accessible, democratic and widespread than ever before, which is great, but it means there’s less financial value to them, in a way. But there’s lots of other value there instead. This is romanticism, I suppose. Illogical, misguided, deluded romanticism. But we can’t help ourselves.

You’re latest release ‘Take the next exit for love’ is about a lonely man developing romantic affections for a Sat Nav. What inspired this?

I had the idea for the story quite a long time ago. I think it was inspired by an article I read about some countries having male voices on their satnavs because male drivers didn’t like to take instructions from a woman. It got me thinking and I ended up imagining the scenario of falling in love with a satnav. The idea had been bobbing around for quite some time, and when we were invited to produce a special issue for the pop-up shop, it seemed to fit perfectly with the shop’s theme of digital versus analogue. It’s a tongue-in-cheek take on the explorations of artificial intelligence and human emotion we see in sci-fi and philosophy. It’s very Panspermia Press. We’re really into taking very mundane things to unusual extremes. Hence we have stories about fatally competitive yuppies and apocalyptic paper shredders.

Many thanks to PP for answering our questions. Deluxe packs of their short stories will be available to purchase in the Memories of the Future shop from 8th October (and later online if there’s any left) at the bargain price of £4.50. Their current release Take The Next Exit For Love can be snapped up for free at Geoff Blore’s, Nottingham Contemporary, Lee Rosy’s Tea or Broadway Cinema, if you’re quick.

Good news: the new issue of Panspermia Press, “Take the Next Exit for Love”, is now out. It’s a story about a man who falls in love with a satnav. It will either make you laugh or cry. Or perhaps both. Tear ducts and chuckle tubes all sprout from the heart, after all.

You can find copies scattered all over Nottingham – principally at Nottingham Contemporary, Lee Rosy’s, Broadway, Geoff Blore’s lovely bookshop, and on benches all over the Arboretum, plonked amongst brown paper bags and abandoned trainers.

This issue is brought to you in association with Bees Make Honey’s Memories of the Future pop-up shop. Copies will be available in goodie bags (free to people swapping zines) at the shop, and deluxe collections containing all previous issues will be available for purchase at a steal of a price. More on those bad boys to come…