‘Tis done. Scavengers was released, like a grubby urchin, into the wild on Thursday 7 March. And what a week that was. I’ve only just managed to pull myself together so I can put shaky hand to keyboard for this blog post. Bear with me.

Where do I start? At the beginning, I guess. Or a little before it. During the calm before publication week, I tried my Scavengers presentation, for the first time ever, on the Year 6 children at the Iona School in Sneinton, Nottingham, who had kindly agreed to be my guinea pigs.

Photo courtesy of the Iona School

I won’t deny it: I was terrified. So much so that I skipped the buses and spent an hour trekking across Nottingham to the school, in an attempt to walk off some nerves. It turned out there was no need to be anxious, though. Ms Woolley and the children were as warm and welcoming as they were funny and sharp. To my surprise I had an absolute ball, and the experience left me not only excited about further school visits, but also all the more grateful for having ended up writing for children. I was told afterwards that the children were inspired, but I doubt they were as inspired by me as I was by them.

Next up came the Scavengers launch party at the superlative, award-winning Five Leaves Bookshop. This was the Tuesday night before official publication, and by then I was a queasy mess of giddy hysteria. I was also living a surreal, waking dream, since my excitement had been nudging me awake at 4am the previous few mornings.

But again, there was nothing to fear. The shop filled up quickly, glasses of wine found their way into hands, and I had support not only from my family and friends, but also from Stephanie King, my amazing editor, who’d kindly made the trip from London to offer congratulatory hugs, a Kafkaesque goat from Usborne (long story), and a speech that just happened to coincide with me having something in my eye. 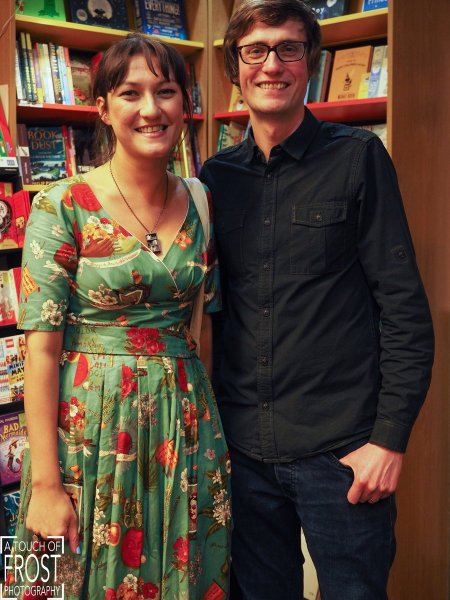 The launch party was intense but lovely. Having a bunch of people saying nice things about your book and asking you to sign copies is quite a treat, of course, but the best thing was having so many friends – many from different little compartments of my life – all in one place. I don’t get out as much as I once did, so it was great to catch up with buddies, some of whom I haven’t seen in way too long. And afterwards there was pizza and pale ale – the perfect balance of tipple and stodge to bring me gently back to earth. 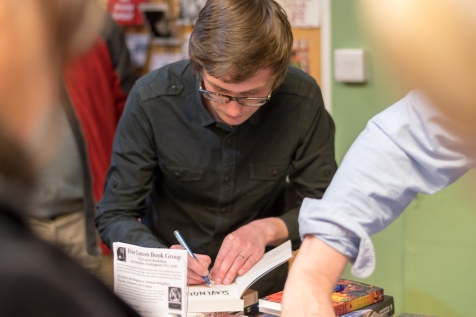 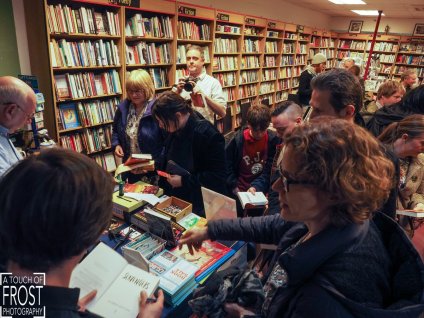 Next up was publication day, which coincided nicely with World Book Day. The morning was mostly a mix of reflection, gratitude and bewildered Twittering. Then I headed to Seely School in Sherwood, Nottingham, to celebrate World Book Day by giving another Scavengers presentation.

While the Iona School presentation was given to 17 children, the one at Seely School involved 65, and the dynamic was quite different. Who’d have thunk it? They were such a feisty, bubbly bunch, and I loved their energy and keenness to get involved in the session’s interactive elements. There was a technical snag with the projector before I started (isn’t there always?), and I asked the pupils whether anyone would like to come up and do a dance while we all waited. I spoke in jest, but to my amazement a pupil jumped up and – to chants and applause – took a run-up and pulled off an incredible somersault. I couldn’t stop grinning. This cocky gymnast was a tough act to follow, but he set up such a great atmosphere and was one of the highlights of my week.

Photo courtesy of the Iona School

And as if spontaneous somersaulting wasn’t amazing enough, the morning after the presentation I received an email from one of the pupils’ mothers to say her daughter read all of Scavengers in one night and can’t stop talking about it. Honestly, I wept a little – just a little – in front of my computer screen. I blame tiredness, but there’s no bigger compliment than someone finishing your novel in one sitting. Plus, after having had a lot of adults enthuse about Scavengers, it was a huge relief to know that it works on its primary audience too.

Friday was a mellower affair. I spent the day bussing and training between Waterstones branches in Nottingham, West Bridgford and Leicester to sign stock and drop off Scavengers bookmarks. This was exactly what I needed after such a strange and intense week: lots of walking with my headphones on, and a bit of quiet reading on buses and trains. And it was great to meet the staff at the Waterstones branches, who were all so friendly, kind and enthusiastic. 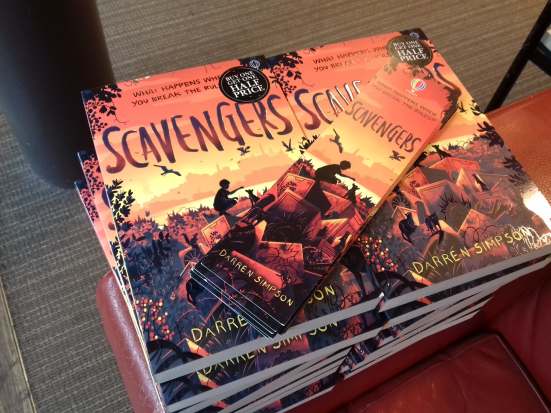 So that was publication week. It’s been emotional.

Now it’s time to prepare for whatever’s coming next. More school and bookshop visits are on the way, as well as some festival odds and ends. I’m also chuffed to bits to be getting involved with Nottingham City of Literature’s Young Ambassadors programme and Writing East Midlands‘ talented young writers.

Keep an eye on my Twitter account for further news and occasional guff. And if you’re one of the people who’ve bought, read, reviewed or championed Scavengers, thank you so, so much.

One thought on “Scavengers and Somersaults – a Publication Week Roundup”